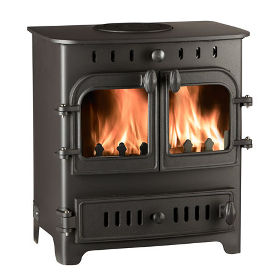 I would like to comment that this time last year I received the worst ever customer service I've experienced regarding my faulty woodburner.

Every unbelievable excuse under the sun was made to deny that I had a faulty woodburner. Even down to the depth of my ash bed. First of all they said I had too little ash followed by Imhad too much. I measured it in the end. I had an overdraw problem which results in the fire roaring and whistling like a furnace. It was obvious the problem was I considered to be a faulty airwash which would not shut off. Defeated and exhausted after banging my head against a brick wall, I had to resort to welding the airwash SHUT. I was informed that this modification would invalidate the guarantee. I would like to add that I have another Villager in another room and have had no problem with it - that was why I went for another one.

Stove expert replied: This problem may have been corrected, so control would be regained of the stove, with the addition of a flue damper or stabilizer.