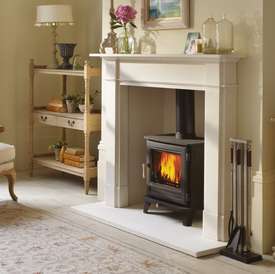 Review of The Salisbury

Following my first review of this stove, I hope the following update to our user experiences will be of help to potential purchasers.

When the top baffle fire brick broke and collapsed onto the fire after only 6 months of use, I simply had to make contact with the supplying dealer! True to his word this exceptionally helpful dealer principal arrived and supplied and fitted a new back fire brick (the perforated one) and top baffle brick free of charge, he also fitted a front panel for the fire box, this one having no holes like the previous cast iron one and is angled which significantly increases the size of the fire box, it also stops almost all of the ash falling out of the fire like it had been doing previously. The dealer also gave us a bag of kiln dried wood because he thought that our seasoned 20 to 30% wood might be still slightly too damp and one of the reasons why the fire bricks had broken. Using the kiln dried wood the fire lit very easily but when throttled down there were still quite large deposits left on the glass door. We are now stacking our seasoned wood against the fire in the alcove, in effect force drying it further and are rotating the stack so that we are only ever burning almost ZERO % humidity wood. The overall performance is now a lot better than previously, but having said that I still strongly believe there are far better stoves on the market with more systems of fire control than this Chesney of ours!
Overall rating: