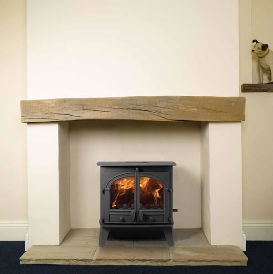 After about 3 months use the grate bars started to deform and break. The fire is always riddled and emptied when necessary although we do run it hot as it heats a large house. We did eventually manage to get some replacement grate bars from parkray but they were half an inch shorter than the originals so didn't fit very well. After a few more phone calls to parkray they sent someone out to look at them and although they were shorter and did not fit properly he said they were the same???? I do realise metal moves around with heat but not to that extent in one direction only. And as the old ones were curved by the heat they should have been "shorter" not longer than the replacements?

After 3 years of being very careful with the fire we are still replacing grate bars. The original 30 odd old parkray we had never had this problem which is why we went back to them but they are obviously not up to the quality they used to be. I'd never buy another parkray as they are no better than the cheaper brands and the after sales service leaves much to be desired (it's always your fault and not theirs sort of approach).

Stove expert replied: You say you run the stove hot, are you running it on max al the time? When you riddle the stove do you do this until red embers fall into the ashpan or do you keep riddling until no ash is left? Do you empty the ash pan straight away or leave the ash to build up in the ash pan? Only riddle until red embers fall into the ashpan and try to leave a bed of ash to protect the grates. Empty the ashpan straight away. If the grates have stretched it could be the metal bar that they sit on has also moved and the new bars will not sit properly.