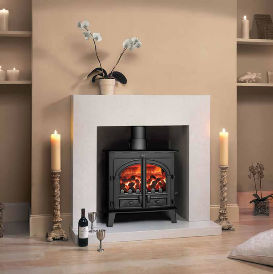 We have owned a hunter stove for several years and liked it so we thought we would get a parkray consort 5 slimline,, the first one delivered was dropped and the door smashed of it, which was more an issue for the company we got it from than the manufacturer. Then the second one had a scratch on the top, the third one we had was OK up until the second time we set fire to it and the glass just shattered for no reason, must have had a knock in the past life! Also we did notice that the double door has a lot more leeward air vents in the door than the single door version, not sure what this will do to the air flow. It seems a nice stove I like the vents being semi covered and hidden on the front it gives it a bit of a swishy look, love the door closed riddling for the full width of the fire, the glass air wash works well, and love the removable handle for the ash tray so you don't have to use gloves to pick it up..