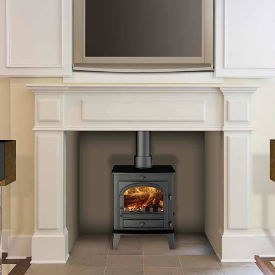 quite nice but somewhat disappointing

This is our second woodburning/multifuel stove. The first one served us well for years at our previous house - so much so that my wife and I were lulled into the assumption that all such stoves are probably well-designed and problem free.

I am giving my impressions after using the Parkway Consort Compact 5 for two weeks. I will state first the positive features of the Consort Compact 5. First, it is indeed compact, whilst still having a good sized firebox. It looks nice, its overall shape being quite elegant. There is a good view of the flames. It generates plenty of heat, particularly when burning kiln dried logs (the typical logs sold at petrol stations etc seem not to burn well as they are too damp), which actually generate much more heat than coal-based smokeless fuel. Thus it is attractive and performs its basic function of burning logs etc. Does its 'airwash' work? Most of the modern stoves seem to advertise this sort of function. I expect it probably helps, but I find that really the glass needs cleaning every time to keep it clear. The stove is 'riddled' via an external knob on the side. A lever is attached to this knob and moved backwards and forwards, with the door closed (to prevent dust escaping into the room), so that the grate is shaken to allow the ash to fall into the pan. However, to say that the process of attaching the riddling tool to the side knob is very awkward. The problem is to do with the necessity for very precise positioning of the prongs of the oddly angled lever with the orientation of the knob. Also, rather disconcertingly, the first time I riddled the stove (in what I presumed to be a normal manner), the whole grate disintegrated! The grate is actually made up of a series of separate metal pieces that lie alongside each other and mesh together. It took me quite a while, and burned fingers, to figure out how they fitted back together. Another function of the riddling mechanism is to open and close the grate. In one position the holes where the grate components mesh together are closed (better for burning wood) and in another position they are open (better for smokeless fuel). The instruction manual says the lever (used for riddling) should be pushed up and away, which restricts the flow of air, whilst it is pulled back the other way for lighting and also for burning smokeless coal. As I found, if the lever is pushed too far (which seems easy to do) the grate may disintegrate. The instruction is also puzzling to me, since both positions of the lever (pushed forward or pulled back) seem to result in an open grate, whereas the closed grate position seems somewhere between these - and it is very difficult to judge where this is when the fire is lit, although you get some idea from the variation in intensity of the flames as the position is gently moved. Paint seems to wear off the stove very easily. As soon as the lever was applied to the side knob, the black finish was transformed to a grey steel colour. The door handle is quite stiff and difficult. The instructions say that the riddling lever can be used on the door when it is hot - and indeed the handle is shaped so that the lever can be applied. This action does work quite well - but I have avoided doing this routinely because it rubs the paint off. Even with ordinary use by hand, or grasping it with newspaper when hot, the paint on the handle shows some signs of rubbing off after a couple of weeks. Overall, my feeling about this stove is that whilst quite nice it is somewhat disappointing.

Stove expert replied: Try putting WD40 on the inside of the handle when the stove is out to loosen it. If using wood do make sure it is dry and seasoned and operate the stove on short periods of fast burn to burn off any tar residues that are produced when the stove is slumbering.