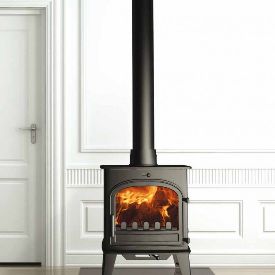 Good but no cigar.

Had this (Lovenholm, single door) ordered a double but online supplier sent the wrong one, (refunded the difference, we live at the end of Cornwall) fitted by professional and certificated to boot, October 2015. With the addition of a stove top fan, more than capable of heating our open plan granite house in the mid to late evenings. Tends to gobble wood, the airwash control is, as many say, fiddly, riddling bar can kick the grate bars out if moved too harshly and you definitely need gloves for use when up to temperature but all in all a good worker. Problems emerged early 2016 when we spotted paint failure across the top (front) of the stove but as it was the end of its usage for the autumn/winter season, simply ignored the matter, had the chimney swept and discussed this with the installer. Recently re-lit the stove and recalled/noticed the problem again, thus sent the supplier an e-mail and have tried to source Lovenholm to discuss the matter (latter part similar to catching a rainbow I might add) Supplier says that the issue is due to damp cleaning creating rust. Absolute rubbish as the ''fail'' line follows the air wash front area and the stove has never been damp cloth washed. Ergo there must be a temperature related weakness and, as I write(sic) this review, I await more feedback from the supplier and continue to chase a contact link with Lovenholm (any clues/hints greatly appreciated)

Stove expert replied: It may be the case that a simple re-spray over this area will solve the problem as perhaps the paint was thinner here than the rest of the stove. Rust will form is a damp atmosphere (could be due to building work) but likely to be surface only. The supplier should have followed this up with the manufacturer as it was reported within the year.