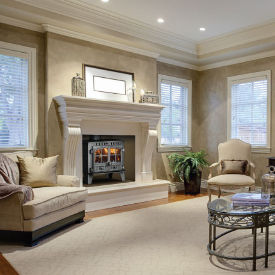 We have the Hunter Herald 14 double door and double sided as we have it in a fireplace between 2 rooms. They are both large rooms and despite all efforts, we can barely get the rooms up 1 degree after running it for several hours. The stove doesn't even get that hot that I can't touch it so something is obviously wrong (or probably poor technique). It is a large space to heat but opting for the 14kW we thought would do the job. Can anyone recommend how to get this thing hot? We've tried it with lots of wood, just a few bits of wood, and coal. Whatever we do doesn't seem to make it worth lighting it. It seems we are just burning money to achieve a nice yellow / orange glow!

Stove expert replied: The problem of lack of heat may be down to a poor draw in the chimney, chimney height, not enough air in the room to allow combustion to occur, poor fuel quality etc. An installer should be able to check the flue draw and free air requirements. Wood should be dry and seasoned with a moisture content of less than 20%, smokeless fuel and not household coal should be used. There is likely to be something that is causing the poor performance so further investigation is recommended so that you can enjoy your stove fully.