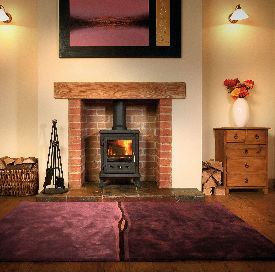 We have two of these stoves, the first one for about 5 years. today whilst I was poking the logs I''d just lit, there was a loud ''clank'', I didn''t know where it came from at first till my wife who was standing to one side said "a disc has dropped off at the back"! On investigating, sure enough what I assume is the alternative rear flue outlet cover plate was laying on the floor at the back of the stove. I fished it out and saw that the fixing ''lugs'' which are part of the rear casting had both sheared off. As an engineer, and on examining this, it would appear that the fixing bolts had probably been tightened up too tight, and with the constant cooling and heating causing shrinkage and expansion they had fractured and finally given up. A fault in design I think, as a slightly larger diameter disc and simply tapped holes would have been a better idea. This is how I intend to repair it. Just something to be aware of.

Stove expert replied: The hot plate that is used to blank off the flue outlet that is not being used, can come off over time, sometimes due to damp / moisture coming down the flue system, corrosion due to damp moist fuels being used and sometimes not having been installed correctly initially or where the fire cement has dried out that was used to hold it in place. Replacement parts are available but in this instance it appears you are able to overcome this.