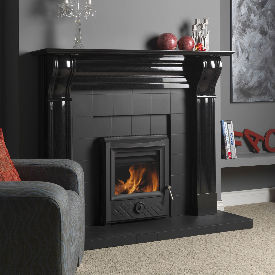 It heats the room well enough and certainly gives out a lot more heat than an open fire. However, I have grave misgivings about the design and build quality. What Esse refer to as 'fire bricks' are the replaceable metal plates in the firebox - two either side and one with an Esse logo on at the rear. In theory they drop into place and should be easily replaceable when burned through. My rear plate has burned through 3 times in as many years and I have had 3 sets of plates delivered from Esse, replacing all 3 each time. This job is a nightmare. All 3 plates have to be removed vertically, but there is not enough headroom in the firebox to allow this, despite the throat plate being lifted out before attempting to remove the 3 plates. When I phoned Esse Tech Services in 2011 to ask how to remove the plates the lady said just to prise the side plates towards the centre - but this is impossible as the side plates drop down into slots at their front ends and prising from the sides would just cause structural damage to the fire. I replaced the plates again for the third time in October 2013 and total time taken was nearly 2 hours. I finally managed to get the third plate in place by hammering it in with a heavy metal chisel and had just about given up when it jammed into placed. In short, these replaceable plates are almost impossible to get either in or out. I finished up the last time with a sore wrist from my efforts, not to mention the mental torture of the exercise. In short, very badly designed. Recently I have also had to replace the glass in the door, which had cracked and also the fire rope on the inside of the door. This I can cope with, but the latest problem is that the horizontal metal plate in the centre of the fire opening when the door is open is starting to bulge outwards - and this is not a replaceable part - as it is part of the body of the stove. At time of writing this I await reply from both Esse and their installation agent on a way forward. In the worse-case scenario it looks like I may have to get the stove replaced - but I would certainly not put another Esse back in. I have only burned smokeless fuel (egg shaped) and this is recommended in their brochure. The grate on the 301 is actually too small for logs anyway.

Stove expert replied: Failures in the internal components on such a regular basis could possibly be due to over firing of the stove, and as you are now saying the front is distorting I feel this would require further investigation. Maximum burn rate is recommended for short period of 15 - 20mins at any one time, with slumbering periods in between. Smokeless fuels also vary greatly in the heat they generate and there are some that are not suitable for use in a closed appliance, worth checking this also.