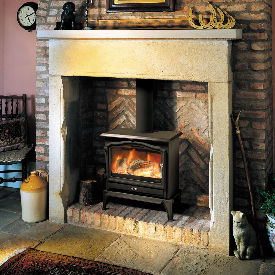 I have had my Esse 100SE since early 2015 and am mid way through my third winter with it. I had some issues with it initially not damping down properly; it ran like a furnace all the time. Despite me having many years of experience with log burning stoves, my installer was adamant that it was either "perfectly normal because it was the DEFRA approved model" or user error. Esse were also adamant it was user or installer error and would not deal directly with me, only via my installer. The installer came and tried damping it down himself without success. Upon dismantling the stove it was blindingly evident that the sliding vent plate had bowed so badly it was incapable of sealing off the air inlet holes. I am a mechanical engineer. The most likely explanation is that the stresses imparted in the vent plate, when it was rolled flat, and when it was profiled, would have been relieved the first time the stove was brought up to working temperature; with the resultant banana shape we found. Esse said they would send a replacement on receipt of the original but that it would take several weeks. My metallurgical knowledge meant I was certain that the problem was highly likely to recur with a new part, but unlikely to do so again with the original; so I straightened the component in my workshop and we refitted it. It has been fine since. Esse flatly refused to discuss the issue with me subsequently, despite my attempting to warn them of the problem.

As to its performance since? My only real criticisms are that: 1) The air control is very much on/off and it can be tricky to get the fire burning as you''d like. 2) The ash tray is difficult to get out without spilling it everywhere and the grate is awkwardly shaped to shovel out. Would I buy another? No, I don''t think so. Not because of the warping baffle issue, that was easy enough to rectify, although it shouldn''t have happened; but I''d definitely look for something easier to control. The "Little Thurlow" I had in my previous home was much easier to live with.
Overall rating: