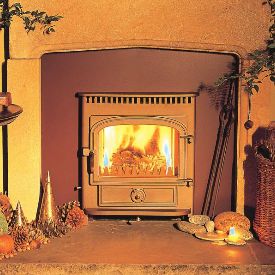 I think if it had been a third of the price (paid c.£1.5k) I'd be rating it higher, but for the money I think it should be better. The handle gets hot, although after a week it's fallen off so perhaps it's meant to be removed (or the tiny allen key bolt wasn't done up properly). I find it very hard to light, with no obvious reason why - can put a match in to some newspaper as tinder & it'll instantly die, despite the door being open. Once going, it burns well with the wheel open, less well with it closed, until really hot (about half an hour). The ash doesn't seem to sit as a layer on the bottom, it falls through the riddling grate. It still smells after 5 burns, possibly a result of buying a coloured stove rather than black? I've no doubt it's chimney-related (mine's two storeys, thermocreted) but if it's windy outside, it does seem to affect the interior of the stove. Perhaps the worst thing about the stove is the constant "click-click-click" from the glass whenever you open the door, and close it again - presumably from the double-glazed window that isn't sealed unit so air escapes on the slightest pressure change. They claim to have the only d-g door but that's patently untrue. So overall - it works, looks nice, the manual was fairly clear (albeit with surprising English errors for something non-Chinese!), it seems solid, and the interior of the stove is larger than I'd expected. However, for that money, I'd have expected more - my cheaper Charnwood, with its removable handle and big ash box, is nearly as good.
Overall rating: