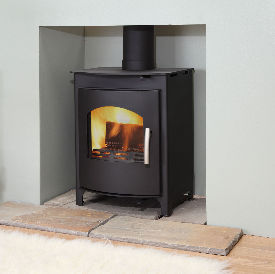 I had this stove installed end of May 2012. The stove itself is elegant with its curved glass door gives it a rather sleek and contemporary appearance. It is well assembled and welded, and has a smooth semi-matt finish. I had difficulty opening and closing the door at first, it seized up on a few occasions and I had to jiggle the handle a few times before it opens again. According to the installer this is due to the new seal around the door and will eventually get easier after lighting the stove a few times, which it did... but the nut and bolt that holds the handle loosen with use thus having the need to tighten it up whenever needed otherwise the handle just drop with dead weight. The "cool touch" handle gets hot after a while of burning, and so does the sliders to the primary and secondary airflows.

Stove expert replied: I would not recommend blocking any air vents that do not have controls on as this may be dangerous.