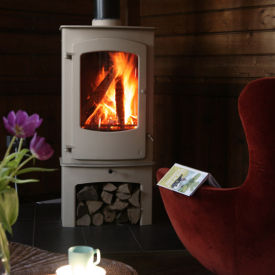 We recently replaced our 6KW Austroflamm stove because it was broken and would only burn wood on a high output, which meant we were going through logs at an exponential rate. We thought by replacing our existing stove with a 12Kw output stove it would deliver more heat! how far from the truth could we be with the Charnwood Cove 3

We have a large open plan split level kitchen, dining and living room area. The living room area has a vaulted ceiling. Due to the size of the room, we decided to buy a larger output stove. During our investigation into which stove to buy, we came across the Charnwood Cove range and after much deliberation, made the decision to buy the Cove 3 due to it's 12Kw output that extends to 16kw when required. We were also led to believe that the Cove 3 would burn for 10 hours, what a disappointment this has turned out to be as well. The Cove 3 was finally installed December 2012 after many issues with suppplying the Cove 3 stove, which was promised by the retailer / intsaller and let down by Charnwood themselves. So this was not a great start as your can imagine. Since having the Cove 3, it has delivered very short on what it actually states it does and again promised by the retailer and Charnwood. I am not sure if this is an issue which emanated by the installer or the Charnwood build quality, however we are very unhappy with the Charnwood Cove 3. The reasons for our disappointment and dissatisfaction are as follows: - The glass remains constantly blacked out despite using 2-3 year old seasoned wood which is stored indoors to be dry - The smoke escapes out whilst the door is closed when you first light the stove, which fills up the room. - Smoke escapes out of the stove when you leave the door open despite placing the wood at the back of the stove, so you cant burn logs with an open door - Despite being a 12Kw output stove that extends to 16Kw, it delivers less heat than our prior stove which was a 6Kw stove. My wife had the stove on two days ago from 9am and untill 6:30pm and the room was still not warm. what a dissapointment! - door handle is not fixed, hence on occassions my wife has issuse opening and closing the door. This is not really an issue, just have to remember how to attached the door handle as it doubles up as a handle for the ash plan. In our previous house, we had three wood burners, Stovax, Stockton and Clearview, all of which we had very good experiences, especially with the Clearview. We under went a thorough investigation and analysis of all the stoves in the market and we were drawn to the Charnwood Cove 3. We have requested that the supplier / installer of the Cove 3 to revisit our house to remedy the situation by troubleshooting and resolving the issues we have experienced following their intsallation of the Cove 3. We hope this will either resolve our issues or lead us to plan B, which will be the replacement of the stove with a different stove manufacturer. I will update you in the coming weeks of the final outcome.

Stove expert replied: It does sound as if the flue draw / design may be at fault and once this has been revisted may well improve the performance of the stove.