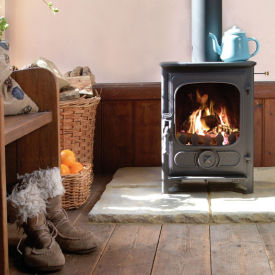 There is one horrible problem - THE THROAT PLATE. The What? The heavy metal plate that forms the roof of the stove. The instruction manual says it should be removed at least once a month to clean it of soot. Unfortunately this is a very difficult operation. You would think very clear instructions would be given. What is given is a sort of very small diagram on page 6 with a side on view with a steeply sloping plate (un-named) apparently a fixed part of the stove, and attached below it a much smaller plate (labelled Throat Plate) which seems to be only two thirds of the length of the plate above it. The one on our stove seems to be almost full length. The rear of both plates is shown as coming right down almost as low as something that looks like the bed of the stove! Ours doesn''t - it''s much higher. Almost nothing in the diagram corresponds to the actual stove. A tool is shown attaching to the Throat Plate. This tool was not provided so you have to move this dirty plate with your hands! The diagram seems to indicate that the top of the plate is much lower than it actually is in our stove. It then shows the plate being removed by pulling it up to the top and then ''swinging it down'' using the un-provided tool. It is not made clear if the Throat Plate is to be completely removed. If it is it is a VERY awkward thing to get back even into the stove - let alone to fix it correctly in position once it is back in the stove. The manual tells you how in two meagre lines: ''raise the front of the plate, push it back and then lower it onto the retaining lugs.'' What are the ''retaining lugs''? They will be labled on the diagram of course. No they are not. Nor are they given in the list of all the parts on page 14. All the diagrams given are pathetically small as well as being incomplete. Instead of decent diagrams vast space is given for nothing (Three blank pages for ''notes'' and another full page for a picture of your cosy stove). I would give 4 or 5 stars for the stove itself and minus several stars to the Throat Plate and the dreadful manual. It is nonsense to give the ratings according to the categories given below. I am forced to give a very low overall satisfaction simply to draw attention to the issues I have described.

Stove expert replied: If you did not get the tool that is talked about in the manual do go back to the supplier to request one. The throat plate seems to come down to sit above the back liner and there should be some retaining lugs on the side of the stove for it to locate onto and be held in its working place, when dropped down the debris should be able to be removed without taking it out of the firebox. If you need to remove totally then remove other internal parts that may restrict the opening ( fuel retainer etc) and bring the throat plate through in a diagonal position.