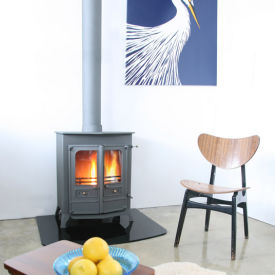 Review of Charnwood Country 16 b stove

I've had a Charnwood 16B for 8 years, and have been happy with it, it has supplied all our hot water and heat over the coldest winters. We live in a timber frame house which is very well insulated, so it has never been overfired, and has always run on anthracite and/or well dried logs. It was originally intended as a back-up to our oil fired boiler, but it became the primary source of heat in our house. Previously we had another Charnwood, the predecessor to the 16B without the wraparound boiler, we had it just over a year before it developed water leaks somewhere round the air inlet. A Charnwood rep came out and examined the system, and was happy to replace the stove without any quibbles. Now, 8 years on, the 'new' stove has developed leaks, both around the thermostatic air flap and, more critically around the airwash tubes at the rear of the boiler, one of which opened up suddenly and flooded the living room carpet. Charnwood this time did not want to know, and simply suggested getting it welded up. Due to the design of the stove, the weld cracks are absolutely inaccessible to a welder, so effectively the stove is scrap.