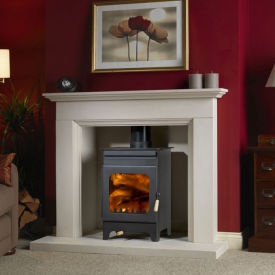 One of the reasons we went for a Burley was the inclusion of a steel mesh as a final stage of burn - this would (we thought) eliminate any chance of sparks going up the flue. Living in a thatched property, anything that reduces the risk of a thatch fire is welcome. It turns out that there is a gap behind the steel mesh that would allow sparks up the flue, but at least the mesh reduces the chances. It also helps that the operating temperature of the flue gases is about 120c which should result in very little heat in the chimney bricks near the thatch. The clean burn should keep deposits in the flue to a minimum again reducing the likelihood of a chimney fire.

Anyway, to the stove itself. We found that initially it didn't burn very well and Burley tech support suggested checking the firebricks to ensure they had been fitted correctly - turns out they hadn't been, but the actual problem is that the surfaces of the firebricks have square edges and the stove has welds where the bricks sit - so you have to chamfer the edges to get a good fit - all of which makes you wonder why Burley don't supply bricks with the edges shaped. If the bricks don't sit tight against the edge of the stove they disrupt the airflow from the holes that feed the air. As others have noted, we had some shot in the air channel some of which we removed with a vacuum cleaner and some hose pipe. Manoeuvring the stove into position seemed to result in that shot ending up at the front of the stove and in my view affects the airflow. Burley tech support says that is impossible. Burley tech support might want to listen to customers and stop supplying a checklist that says ''shot removed'' when it clearly hasn't been. The glass does smoke up a bit and I think that is partly related to the shot still being in situ as I haven't removed all of it. It may also be that we have a very tall flue with a couple of early bends from the stove to the flue. Burly tech support alluded to the Hollywell 9105 having the lowest flue temp, possibly indicating that it doesn't draw as well as others in the range - that would seem to be the case for us as I can rarely run it without having the air slide fully open, against their recommendation of it being left of centre. Or perhaps these are political comments? Overall we are happy with the stove, it uses much less wood than our other stove and burns more efficiently. It is a pleasure to watch, but I haven't seen the famed ''fireball'' effect. A good stove for thatched property owners.

Stove expert replied: Removal of shot will be undertaken prior to the stove leaving the factory and every effort to remove it all will be made, unfortunately it seems that on occasions a small amount can be left behind and in transit moves and sometimes this leads to problems which generally are overcome once removed when investigation high lights the cause.