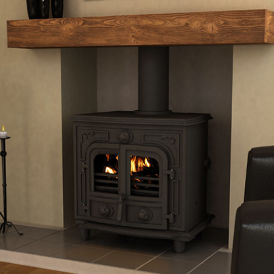 Had the 30kw for several years now. I have other brands throughout my property and can say it's probably the last in line for praises. It looks superb and is of sturdy construction, but that's as far as it goes. My chimney dates from the late 1700's so is about three feet by two feet and is vertical and kept clean. The fire is clean and has a new stainless steel liner for about five feet up the flue but unlike my other fires, including the marvellous 'Clearview', it doesn't want to draw. I've spoken on several occasions to the tech guys who were very helpful, but I'm afraid in my eyes, once it's had its best - it's gone and I won't be getting another.

Stove expert replied: The liner should go from top to bottom in the flue not part way. Is it insulated round the liner as you have a large gap round it by what you have written? If not insulated then this will certainly affect the way the stove can perform due to the cooling gases in the flue system. As you have other flues in the property they may be robbing this flue of a good draw and further investigation on all the stoves is recommended, it may not be the stove at fault and more to do with the installation.