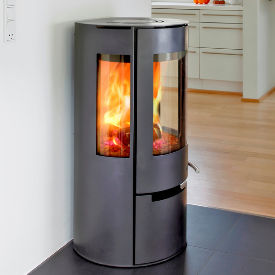 My Aduro 9-3 was installed just over a year ago. 6 weeks ago while it was alight, I heard a noise which I thought to be a log settling. Immediately the fire began to burn furiously and only the application of all dampers managed to slow it down somewhat. When I was able to investigate, I noticed a flexible fire-rated tube dangling from the top inside, which fell into the ash almost as soon as I opened the door. Said tube obviously has something to do with the burn rate but its impossible to refix it, even if you knew where to. Having taken the stove apart from the top as far as I could go, I was confronted with the innermost ''ceiling'' which is welded to the sides. The stove continues to burn through logs at an alarming rate and the dampers barely make a difference.

Stove expert replied: Aduro have responded to your inquiry with: Most probably, since there is a piece of the chimney liner in the fireplace, something must have happened up in the chimney, creating this situation. From what I can tell it looks like there is too much draft, perhaps the stove was fitted with a moderator or a damper that is now not active/damaged/open all the way. The problem doesn’t seem to be related with the stove in any way. The best recommendation is to call back the Hetas registered installer that originally fitted it.