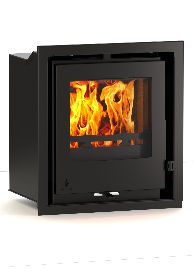 I had this i stove installed in October 2015 and despite having the manufacturer out they have still been able to resolve. The heat out put is less than the 2kw gas fire that was removed. The installer is registered and has been back several times, the stove flue is lined and back filled and a flue damper added as recommended in the first instance by the manufacturer. I have no issue with the shop and installer they have been excellent but the manufacturer just quotes lab testing but admit the heat is low as not the 6kw quoted. The air intake levers are also difficult to use and to see, I have to open the door to operate them. I have an Eco burn stove in another room which is great so I bought this one with confidence as it was from the same manufacturer. I have given up now and my retailer is replacing it free of charge for a different model.

Stove expert replied: This stove model was used when this range was first brought out and hasn’t been used for circa 4 years since becoming i400s/i400/i400t . The stove is a convection stove so will perform differently to the Ecoburn which gives radiant heat only. The stove is now rated at 4.9kw nominal output which comes from the CE test results which follows a set of BS test regulations, it has to be done on a 6” liner at the optimum flue height of 4.5m running at 12pa. If this is not supplied in this installation then the output may vary and the flue may be affected by weather conditions which will impact on the output accordingly. As you have another working flue in the property this can also affect how a stove performs in this flue system and should be checked as replacing it may not give you the results that you may expect.