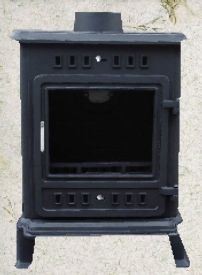 Review of The Horton

Consider Other Stoves Before Buying This One

This stove has been in installed for a week now and used everyday for the past 7 days. Chimney is about 5 feet of 5 inch single wall stainless flue connected to 8 inch internal dia twinwall (insulated) flue, with a rain cowl.

I have installed and used a few woodburners, the others being well known brands. As this particular installation is only going to be temporary (until the house is finished and I install a larger stove) I did not want to fork out the better part of a £1000 on a stove that I would be replacing. I thought I would try one of the far eastern stoves, the 'HORTON' is sold under various other names. Firstly the far eastern stoves are usually just sold as multi fuel, and akin with many multifuel stoves, burning wood on them is a bit of a compromise, but it would appear even more so with this particular stove. The air vents appear to have insufficient flow to burn wood with any degree of control. The fire was very difficult to light and had no control . Having tried all combinations of vents lighting etc I decided to make a few simple modifications to burn wood. I have removed the riddling grate (which incidentally was very difficult to riddle and get moving even with wood ash)and the plate it sat in and replaced it with 10mm thick steel plate, this plate was cut 10mm shorter in depth to allow the air to come through the btm vent up and over the wood fire bed (rather than underneath as per multifuel grate). The air holes on the door had casting flashing covering up the air holes, these were cleaned up with a dremel and grinding stones (no mean feat-cast iron can be very hard!). Even with these improvements I feel the air flow is insufficient. You need to light the fire with the door kept ajar, as soon as you shut it the fire nearly dies. Suspecting the flue to be causing the problems when cold I have also re lit the fire when the stove and chimney are hot, same problem exists. The only way to get a good burn is to get the fire really going by leaving the door slightly ajar, add logs keep the door ajar, do the same again, then when you have got a red hot fire going shut the door, close btm vent and open top vent. If you keep the fire going pretty hot you can keep the fire going and regulate it reasonably well with the top vent. Unfortunately this method is not a very efficient way to burn wood. If the fire dies down and you don't put wood on early enough, it really struggles to light the fresh wood. So you have to go back to the door ajar method. Maybe the 8 inch dia flue is perhaps not helping the draw. But this is within the recommended guidelines of the supplied installation instructions, but I don't think the draw on the chimney is the problem as when you open the door slightly when the fire is going well you can get it to roar. In conclusion, you can get the stove to work to a fashion, but it is not straightforward compared to the other stoves I have used. I suspect it would work better with coal. The stove looks great and is well built (over 90kgs)but performs poorly in every respect. The stated 8kw output must be with coal at full chat. Even with my well seasoned dry wood I suspect max output on wood to be about 5-6 kw, but that would be after really getting it going with a red hot ash bed, normal firing expect to get 3.5-4.5kw. If you are only going to burn coal, or only use your stove occasionally this stove may be worth a try. If you intend to burn wood only I would suggest buy a wood only stove, which will probably be a known brand. A good make will provide you with more control over your fire, controlled and efficient burning will prove to be more economical in the long run. If you are on a tight budget I would buy either buy a secondhand well known brand or perhaps look at the cheaper stoves such as villager etc (I had a medium sized villager it was superb, although my mother in law has the large villager with a boiler and it eats wood) Personally I would choose cast Iron over steel, having used both types the castiron holds the heat for longer and 'evens' out the heat output of the stove as the output from the fire varies throughout the burn. If you can avoid it do not have a wood burner with a boiler, the circulating water in the boiler keeps the firebox temperature down making for an inefficient burn. If you must have one with a boiler try not to have one with a wrap around (i.e. 3 sides of firebox) just have one with a back boiler. Or if you have the money there are more expensive stoves that get around the problem with clever stove design. There is some really good info on woodburning on a Canadian website, The Woodheat Organisation at www.woodheat.org
Overall rating: