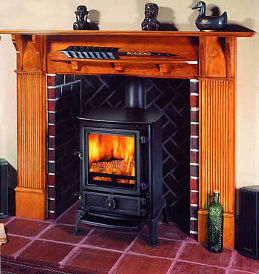 This is the first stove I have owned and have used it for a couple of seasons now. The heat output is great and is as controllable as a lump of cast iron can be! I generally use logs as a fuel and agree with the other reviews that the flames are rolling in view of the glass which generally remains clean and look great! Its easy to light, I generally use newspaper and some smaller logs and it normally goes a treat.

A word of warning to new stove users - I have found it important to burn dry seasoned wood in the stove. The air wash ceases to work effectively and the glass soots up quickly if new or damp wood is used, it also makes it a pain to light even with fire lighters and kindling! Occasional use of solid fuel has proved that the stove is a great little all-rounder 'easily staying in' all night - brilliant if the winters are as cold as the last! All in all I think you get what you pay for, obviously there are cheaper equivalents out there, but would they last or perform as well as the 2CB? I think probably not - its worth the extra for a quality little stove which looks great.
Overall rating: