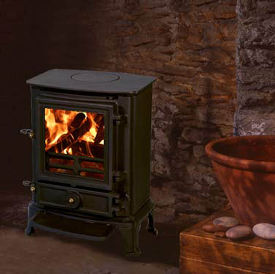 Review of Stovax Brunel 1A stove

Good stove, but get a thermometer

We've had a Brunel 1A for about 18 years, using it every evening from mid-September through to about mid-April. It's in a an old fireplace in a large room (40 x 15 feet) but makes a good job of warming it up as long as the doors are closed. That's more than I would have expected from such a small stove but it was the largest that would fit into the opening without significant building work. Like other reviewers have reported, the top plate on the stove cracked after a couple of years and the enamel started flaking off. I think that it is more than likely my fault for over firing it, which is easy to do, so my prime recommendation would be to buy a stove pipe thermometer. When I fitted mine, I found that I had been mostly burning too cool (hence the sooty window) or too hot. Since fitting that, I have burned far less wood and found that I was getting more heat overall, although you do need to fiddle with the controls to keep it in the sweet spot. When burned like this, the glass stays clean (using seasoned wood) except for the bottom 2 inches which gets soot, and the rest does mist up after about a week with fine ash deposits. These come off easily with a wet kitchen towel - no chemicals needed. Over the 18 years the only maintenance has been to replace the ropes around the doors and around the baffle box at the back (once for each). Be warned, getting the baffle out is like solving one of those metal puzzles you used to see as a kid, except that this thing is HEAVY! The only other sign of wear is that the firebricks are starting to erode and one has cracked but, given the number of tons of logs they've burnt, they don't owe me anything. With the cracks, I did worry about fumes, so I have a strategically placed CO detector, but it's never given a cheep, and I never smell smoke, so I am suitably reassured. We have a good pull on the chimney so the negative pressure should keep everything where it should be.

So, in summary, this is a good little stove but buy a stack pipe thermometer to get the best out of it, especially if you choose one with an enamel finish. Rating: Dropped one star because of the misting of the glass and possible issues with the enamel finish.
Overall rating: