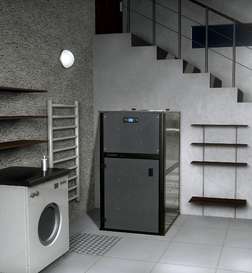 We had a Klover PB35 installed in November 2015. From the outset, it has produced excessive smoke and soot. Despite several attempts by our installer to modify the flue and adjust settings, the problems largely remain. Black smoke is emitted for 2-3 minutes every time the boiler moves to ''WORK'' phase, which is a particular problem for us as the flue is opposite a bedroom window. Not only so but the boiler needs emptying of ash and cleaning almost twice a week which is a dirty process. Despite wearing a mask and gloves, I require to wash my clothes and take a shower after cleaning the boiler.

Stove expert replied: It is normal for there to be smoke coming from the flue for a couple of minutes during the ignition phase, while the pellets are getting properly alight, and again for a short period when the boiler moves up to a work phase. For all the rest of the burning time there should be no smoke, which is what I think you've found. If the flue terminal is close enough to a bedroom window for fumes to enter then another section should definitely be added so that that it cannot occur. Ash and soot are created by any appliance that burns wood and how often you have to empty the ashpan is totally dependent on how much pellet is being burnt. If you are emptying the ashpan twice a week then it suggests that the boiler is working very hard, which gives the idea that it is either heating a large house or one with a low level of insulation. Can I suggest that you get an ash vac, which makes cleaning it out a lot quicker and dust free.