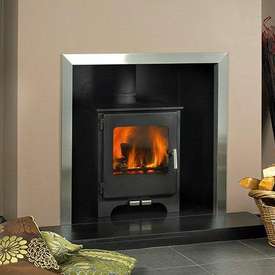 We've bought two James Smellie stoves, one each of the Crator and Ivanhoe models. They are installed in very different chimneys so I'll review both separately. The difference in the reviews are more "low draw, solid fuel" and "high draw, wood burner" than "Crator" and "Ivanhoe". The two stoves are essentially identical apart from styling. The Crator is square whereas the Ivanhoe has a few curves to the design.

We installed the Crator in a small room in our early Victorian house that can be very cold. The room is on the ground floor but open to the rafters, and it has two solid outside walls. Past owners of the house had blocked off the fireplace and installed a gas fire. We opened this up, which exposed how damp the wall was, and installed the Crator, which soon dealt with the moisture in the walls. The chimney here is not much more than the minimum required so there isn't a great draw. However, given we have the luxury of comparing two identical stoves in different chimneys I can vouch that several factors scored in these reviews (e.g. ease of lighting) are affected FAR more by the chimney than by the stove. With this short of chimney it can be tricky to get a fire started but once the flue is warmed it burns well and it puts out plenty enough heat. With the room door open it easily heats the adjoining rooms too. Because this room is used sporadically during the day and is occasionally used as a spare bedroom we've tended to use smokeless fuel in this one. That makes it much easier to keep ticking over without attention, and happily keeps going overnight after loading it up last thing. Once established, we usually have both air controls fully closed. The smokeless fuel we've used is Homefire. We're about to try using the Homefire-ovals that are slightly cheaper. The recommended fuel, Ancit, isn't easily available locally. I liked the simplicity of the design and in particular that the ash pan drawer was covered by the door, resulting in a very 'clean' appearance. The size was good for us especially in this small room, and it being multi-fuel and DEFRA compliant. Being only 5kw there's no requirement to have a vent in the room wall - last thing this house needs is more drafts. We find the air wash works very well in the other installation but with the low draw from this one, and possibly because of using more solid fuel rather than just wood, the window does tend to blacken up over the day. If you lit this daily there'd be no problem with a quick wipe with a damp cloth each morning. There's more comments about wood burning in my Ivanhoe review. Both stoves were installed using the top flue connection. Both installed easily. James Smellie was unknown to us and we were going to buy a stove at twice the price, that we'd seen demonstrated. This stove isn't quite so impressive in its degree of control (part of that is the DEFRA multifuel compliance), but we did buy TWO of them for the same price, and it's perfectly controllable enough. Various factors resulted in us choosing this stove over a few others our installer had suggested. One factor was that it was UK-made. Where a local equivalent is available I see no reason to cart one half way around the world for all sorts of ethical-shopping reasons. Also, I liked the ability to get in contact with the designer should I have any problems. I've been in contact, for general advice, and found them friendly and helpful.
Overall rating: