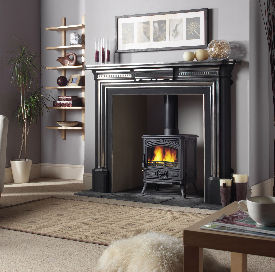 My stove was fitted professionally 18 months ago. It stopped working properly (smoke coming into room when refilling) 4 months later and the fitter found the top baffle plate had warped and was blocking the outlet. He had to take an angle grinder to it to get it out, half a days work He contacted Franco Belge, this is / was a known problem with these. He had to argue to get a free replacement. The stove is multi fuel with only seasoned wood and approved merchant supplied smokeless used on it plus a flue temp gauge, please bear this in mind because the 'experts' will always try and blame your fuel. There is a good deal of denial about this fault on these stoves. My fitter was excellent and he will not recommend these stoves at all now. The grate is now burned through which I have patched up with an old bit of a barbecue, and the product outlet lip has rusted and corroded off (and yes I clean the crap off it regularly as if its left on it can cause rust, nor does it rain down the flue pipe, ive heard them all !) . Now it has some air going through it even though its in a state it works fine after I jammed the rear insulating panel up with a screw as it kept falling down over the fire. With all the good reviews perhaps there is just the odd Friday afternoon stove knocking about so Im not going to embark on an assassination based purely on one stove, but I would seriously take these issues into account before buying one, and check the price of spare baffles / grates no matter which type you buy, Franco Belge Montfort are astronomical compared to other reputable makes. Its roaring away in the fireplace quite nicely now, but I wouldnt have another one and they are too much of a big ticket item to be replacing after a couple of years. Makes gas seem like a cheap option !.

Stove expert replied: Having consulted the UK distributor regarding these comments it is felt that this stove has been over-fired or has been using a high pet coke based fuel causing distortion to the internal components. The only other reason the grate could be in this state is if the ashpan has not been emptied often enough and has been sandwiched between two sets of ashes and the hot fuel. Ash should not be allowed to build up and should be emptied regularly to prevent the grate from overheating. If you had the original bolted in baffle this would have been replaced under warranty.