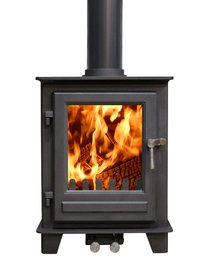 Michal Sur one year ago

We have had the stove for three months now and find it frustratingly smoky. It was installed by a professional stove dealer/installer company. They installed a chimney liner with it. The chimney is about 5m tall. It is a detached cottage without any objects-trees blocking the air movement. Chimney flue goes straight up without any bends. We have tried everything possible to figure out the cause of the smoke coming into the room. It happens not only when we start the fire but also if the fire has been going for few hours (so cold flu and downdraft can not be the reason). Every time the door is opened (slowly and let it slightly open for 20 seconds before opening it fully) smoke and sparks come into the room. If the fire is burning strong it is not only smoke but also flames! I tried playing with the controls, having them closed or open during reloading the stove, trying it on windy or still days, trying it on days with various wind directions and strength but nothing helps. I also tried opening windows on the room prior reloading the stove to see if lack of draft is an issue but it made no difference. The only thing I can think of is that the baffle is too restrictive. The stove is designed so that smoke is directed towards the door/glass before being sucked into chimney. This means when the door is opened the smoke/heat goes for the bigger opening and we end up with smoke and flames going into the room. It is a nice stove but just does not work for us. Every time we reload it we have to open window for 5 minutes to get rid of the smoke from the room. Very frustrating and annoying.

Stove expert replied: It appears that you have tried various ways to overcome this problem. It may be that a chimney fan would be the answer to aid the lift of flue gases when the pressure changes with the door opening. There is a fan on the market that has a money back guarantee so you would have nothing to loose by going down this route and perhaps a lot to gain.