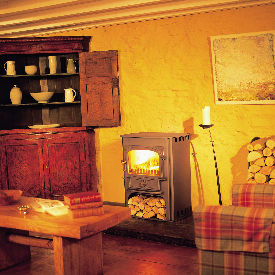 As I used this site a lot in making my decision I thought it only correct to provide my input. First up - I have never owned a stove before so its hard for me making comparisons to other makes so I won't - all I will say is that people who have visited with experience have been very happy. I do have open coal fires though - no comparison !

First making a decision was a nightmare! I did think about going used route but decided against this - the quality makes seem to be reaching up to 75% of the new price! I reviewed a lot on this site and other sources on the web and spoke to everyone I could. Narrowed it down to a few choices, followed up on these, spoke with sellers and installers on the phone and face to face. I decided after a while to scrap my initial budget and increase this to 1200 for the stove (which I stuck to). I would encourage everyone to go through this for a 1st stove. Eventually I decided on the Clearview as a safe bet. Background is that this is in a large house with 4 large rooms and kitchen on ground floor, large hall area, a mid landing and a room off it and 4 bedrooms upstairs. Pretty extensive. We have a modern oil fired combi system with radiators throughout but despite closing doors of a few rooms not in use and turning off radiators in these rooms the cost has become a total nightmare to run the heating part of the system (water is fine). Time for action ! We had several coal fires still active - look great but a waste of time heat wise. And so much effort cleaning and setting every day ! Then really regular top ups. The stove should really have went in a central room but I decided to put it in my TV room in the corner of the house as that's where the leisure time is spent - as I say not ideal location. The 8kw Clearview is oversize for the room for sure and I wondered if this would be an issue. We got someone to install it with liner, register plate, etc but with me doing all the prior heavy labour opening up and finishing the fire place. £600 but you could pay a lot more. Got the stove in and hooked up. So reaction - Its a dream ! Its been in for weeks and weeks now - heat is immense and probably there would have been too much heat handing in one corner of the room but I expected this. We have always run it with the door fully open in the room the aim being to get some of the heat circulating round the rest of the house. I had thought about a stove fan and after a week of initial use on the Clearview bought one (the copy not the brand !) - works brilliant and the change in the room was really obvious - much more comfortable in the corners. Occasionally open the window air vents - something I never thought i would ever do in our 1855 house ! The heat output seems great and normally due to what I am burning (pallets and old chunks of pine from a children's park (didn't steal it !!!) I don't quite reach the recommended temperature - sure this will change if / when I use hardwood logs. The temperature of the house has completely changed - we now have a nice comfortable living room with a great heat and the rest of the house is noticeably warmer an comfortable - not hot house plant standard like my mums but fine for what we are used to - our heating has not yet been on despite some cold nights. Also - I used to find with the oil as soon as its turned off within an hour the house was freezing again - this just does not happen any more. I am more or less burning 24 hrs - round the clock burn is easy. Air vent in most of the way before bed, fill stove with big chunks of wood. In the morning, up, coffee, open both air vents - always embers or bits of wood not fully out - throw some kindling on it, pack up with pallet wood above this, close the door and in 10 mins its blazing again and time to add chunks. I have had this for weeks and weeks now and have only cleaned once and that's because I tried coal in one night as an experiment - wont repeat this as it generated too much unburned material - this makes me think that multi fuel was kind of overkill. As we move towards the Scottish winter my general feeling is that due to the size of the house I may add another stove into a currently open fire in a central location - I am sure if I do this I will never use the oil heating again. I would not hesitate to put in another Clearview 500 - that would be ideal but I think I will go for a smaller stove, ebay bargin purchase !, and give it a go, safe in the knowledge that the Clearview is doing a great job anyway. If it does not work out I will sell on when I have money for a 2nd Clearview. Totally recommended.

Stove expert replied: Honest feedback of this stove and how it is working. If you used household coal then this will be why the glass discoloured, only use smokeless fuels on a closed appliance unless the manufacturer says ordinary coal is acceptable.