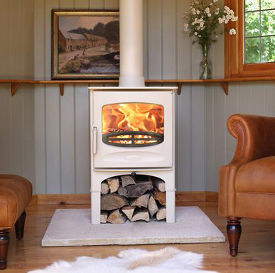 Initially, we were thinking of installing either a Clearview Pioneer 400 or a Contura 51L, but in the end we opted for a Charnwood C5. Here is our verdict!

Glass Cleanliness : We have found that the glass stays very clean on the C5, provided that the single-damper (with three positions) is kept open during the lighting phase and remains so until the stove enters the optimum temperature range, as indicated on the stove pipe magnetic thermometer. (We bought this as an optional extra and, at under £20, I see it as a vital piece of kit, ensuring that the stove is refuelled at the right time and also burns at maximum efficiency.) Ease of Lighting - The C5 is very easy to light, especially on a bed of ash that builds up after a few fires. Screwed up newspaper, 12 sticks of criss-crossed kindling and three small logs on top, has resulted in an easy and quick start every time, especially with the door left cracked open until the fire is well-established. Build Quality - The C5 is mostly cast iron, with a single air control at the bottom. Charnwood stoves are British made on the Isle of Wight and I have been informed that they are manufactured to the highest standards by a traditional firm, many of whose employees have been with them for years. Also, the C5 comes in a variety of (eight) different colours and there is a rear flue installation adaptor. Handle and Door - The C5 has a handle on the front left hand side. What is really good is that handle has a wooden grip, which means that the door can be opened for refuelling/stoking without the use of a glove, although you do still need to be very careful! Installation - One of the reasons we eventually chose the Charnwood C5 is because it takes a 5"flue liner and we were advised that our chimney might prove problematic for a 6" liner. Having ˜googled" this issue, I found that stove installers have commented on problems associated with 6"liners. (Both the Pioneer 400 and the Contura 51L require 6" liners.) Multi Fuel - The Charnwood C5 comes in both formats, so a choice is available. However, we only wanted a log burner. There is no ash pan. The fire sits on its own bed of ash and every few days some of this needs to be scooped out, but I don't find this a chore; It's all part of the fun of having a real fire. Log Size - The C5 takes 25 cm (10") logs very comfortably, just like the Clearview Pioneer. Viewing - The C5 has a viewing window that is larger than the Clearview Pioneer 400, but smaller than the Contura 51L. Responsiveness - The C5 responds instantly to air flow adjustment. The three position lever enables the damper to be left closed, open and also pulled right out as a boost, which is also used when lighting. The other good thing is that the damper can also be left open just fractionally; this helps keep the glass perfectly clear. Cleaning out the ash - As above, the log burning version has no ash pan and therefore ash needs to be scooped out periodically. I would estimate it takes a maximum of maybe five minutes to prepare the stove for the next day's fire. Dimensions - The Charnwood is physically smaller than many stoves and therefore might sit more comfortably in a greater range of fireplaces. Width 485mm; Depth 292mm; Height 560mm. Price - We found that the Charnwood C5 is significantly cheaper than both the Clearview Pioneer 400 and the Contura 51L. Summary: In the end, we chose the Charnwood C5 because it provided a great compromise between the old-fashioned look of the Clearview and the ultra-modern look of the Contura. Also, the 5" flue ensured that the installation was straightforward. We also liked the large viewing window - quite a bit bigger that the Clearview and not a lot smaller than the Contura. Also, we were advised that it's much better to have a stove that works hard, rather than one that just ticks over because the room gets too hot otherwise and I was a bit concerned that the Contura 51L with its 3-7Kw range might be too powerful. Our room is quite large 5.5m x 4.5 m x 3m (18ft x 14ft and 9ft ceiling) but the Charnwood C5 keeps it very warm, even though we leave open the connecting door to the hall. In short, we have no regrets about our choice of stove and are very pleased with it so far.
Overall rating: