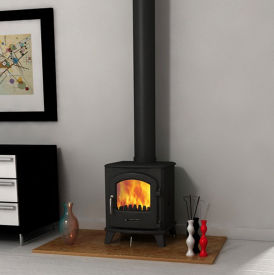 I purchased the Serrano through an internet site. It looked exactly what we were after looks wise and was a defra model as well. It was purchased in November 2013 and installed later on in the month. Initially had a few burning problems due to the direct air pipe sticking out at the rear of the stove which prevented the air being drawn into the fire. This was cured by the installer coming back and pulling the fire forward to allow more air flow to the rear of the fire. Within a month of being used the fire started to develop unsightly blemishes in the painted surfaces which after a week or so developed and became ugly rust patches on the top, sides and front of the stove. I contacted the supplier and after some discussion Broseley agreed to replace the stove. As to the burning of the stove I wasn't convinced that it was right, it needed lots of air and on the recommendation of a friend I bought a flue thermometer to assist me in getting the right burning temperature. No matter how I fuelled the fire I could not get this to burn too hot and as soon as you let the fire cool a bit there was no going back, lots of kindling and softer wood was needed to get the fire back up to temperature but I found I was constantly feeding it to try and keep it burning at the optimum burning temperature.

The stove was replaced and re- installed in February 2014 and again following installation I was unhappy with the burning process. The levers that control the fire were very notchy and in my opinion weren't working correctly. The installer returned again and had a play about and managed to straighten the control levers which then allowed air to enter the chamber and give a reasonable burn. So off we go again, seasoning the stove with a few small fires, slowly increasing the size of the fires. Same thing again in my opinion, I was working hard to keep it burning nicely. Approximately six weeks later the same blemishes started to appear and again these developed into rust spots. Well as you can imagine I was far from happy so contacted the supplier again. After my initial conversation with them I was fuming after being asked the most ridiculous questions about the location of the stove etc. I did eventually talk to the office manager who was spot on and spoke to Broseley stoves. I had by this time had enough of the stove and the manufacturer and asked that the stove was exchanged for a different brand altogether. I really didn't want another Broseley stove. This was eventually agreed with Broseley that they would pay to have the stove removed however they wouldn't pay for me to have the new one installed, given that I had already paid to have the original one installed, had all the mess of the stove being taken out and re-installed I was a bit disgruntled to say the least. Admittedly I wasn't having another Broseley installed but I had just had two stoves rusting in my lounge within four months of them being installed which in my opinion is pretty poor quality workmanship. Unfortunately I have nothing at all good to say about Broseley stoves other than we loved and still love the look of the Serrano 5 SE. Its such a pity that the quality of the stoves is poor and there seems to be little or no quality control or maybe I just got the two stoves that slipped through the net late on on a Friday afternoon ! I have now purchased a Morso and wow what a difference, the airwash works well, and rarely do we have dirty glass, the burn is fantastic, what a difference in a small amount of additional money we spent to upgrade to the Morso. My recommendation would be to spend a tad more and go for the Morso.

Stove expert replied: A great shame to have had two stoves with similar faults, most unusual. It is good to hear that you are now pleased with your stove and hope you enjoy it for many years.